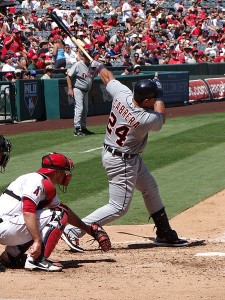 On October 22 Miguel Cabrera had surgery to repair bone spurs in his ankle, but doctors were not prepared for what they found.  “It’s worse than what we ever would have anticipated” said Tigers’ General Manager Dave Dombrowski, because what they found may keep Cabrera on the sidelines into next season.

In addition to the bone spurs, Cabrera was found to have a stress fracture of his navicular bone, which required the insertion of 2 screws.  “Stress fractures”, says Dr. Hirt “are commonly caused by overuse. Bones are very strong and can handle a lot of stress, but when pushed to their maximum, they either break or a stress fracture forms.  Stress fractures are best described as an incomplete break; think of a green tree branch, when you bend it it doesn’t break completely, but it cracks and comes apart.

The navicular bone is unique because it is where the posterior tibial tendon attaches; this is the tendon that holds up the arch of the foot.  When the foot hits the ground, the arch wants to flatten some and the posterior tibial tendon prevents this flattening.  This is why the repetitive trauma of a baseball season could cause such an injury.  The twisting motion of batting and throwing as well excessive running, sliding, and other repetitive movements put the bone and tendon under tremendous stress, which can lead to the fibers of the tendon pulling away from the bone, and if the pain is ignored and the problem goes on for a long time, the tendon could rupture completely.

The most common reason the average person would develop a stress fracture in their navicular bone would be from excessive pronation of the foot, where the arch tries to flatten when the foot hits the ground.  When the ligaments and joints of the foot are loose and allow the arch to flatten, it puts even more pressure on the tendon and bone.  There are both surgical and non-surgical fixes for both the tendon and bone, and the earlier the problem is addressed, the less likely it will need surgery.  There are many non-surgical options available: specific braces made to remove pressure from the tendon and bone, and if the arch is too flexible a custom functional orthotic can offer relief.  These orthotics are NOT like the ones you buy in the store, which are made for cushioning and not support.  In the office we take a mold of your foot and build an orthotic custom to your foot and the support it needs.  This creates an orthotic that fits your individual foot perfectly and gives maximum support to prevent the excessive movement of joints and tendons, preventing injuries like the ones suffered by Miguel Cabrera.”

So if you’re having foot pain or discomfort, make an appointment today by calling us at (810) 629-3338 (FOOT).  At Fenton Foot Care we have many options to help you feel better and avoid injuries.  Whether you’re a professional athlete, a weekend warrior, or none of the above, you don’t have to live with foot pain!

Things to remember when buying your boots this winter

When to be Concerned about Your Child’s Feet