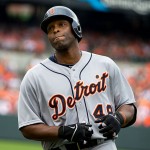 On Wednesday, Detroit Tigers outfielder Torii Hunter sustained a bone bruise when he fouled a pitch off of his left foot.  While a bruise may not seem like a terrible injury, it left him “hobbled” in the words of his manager Brad Ausmus, and kept him out of the lineup Thursday.  Planting your foot in order to swing a bat or throw a baseball puts an enormous amount of stress on your feet, let alone all of the sliding and running necessary in a Major League Baseball game.  Therefore, players’ feet must be in top condition at all times, which means resting them even when they have something as seemingly minor as a bruise.  Without rest, the condition only gets worse, which would sideline Hunter even longer, and that would be bad news for the Tigers who are in the last weeks of the season and fighting to make the playoffs.  Ausmus hopes that Torii will be able to play tonight against the San Francisco Giants, but still says Hunter is day-to-day; he doesn’t want to further injure his star outfielder.  So if you have foot pain, don’t put it off and let it get worse, make an appointment with Fenton Foot Care today and get back on your feet, doing the things you love!