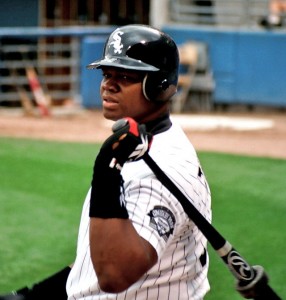 Frank Thomas was inducted into the Baseball Hall of Fame, and had many people to thank for it; 138 to be exact. He joked that he had to cut 50 people out of the speech to keep from running over his allotted time. Hitting 521 homeruns over a career that spanned 18 years takes a lot of support, and Thomas made sure to thank everyone he could. He talked about his mother and the support she gave, along with his deceased father whom he credited with instilling in him his tireless work ethic. Fighting back tears Thomas thanked him for “always preaching to me that you can be someone special, if you really work at it”. He also thanked his team podiatrist, Dr. Lowell Weil Sr. for all the work he did keeping Frank on his feet. Over the years, Thomas was treated for a bone spur “half the size of a golf ball in the front of his ankle,” a tarsal coalition (also known as “flat foot”), hallux rigidus (aka “stiff big toe”), a metatarsal stress fracture, navicular fracture, posterior tibial tendonitis and ingrown toenails. There is no doubt without treatment of these foot ailments, Frank Thomas would not have had the stellar career that he did (us Detroit Tigers fans surely remember all the damage he could do in a White Sox uniform…). Proper treatment by a podiatrist allowed Frank to hit towering homeruns into his forties. Your feet literally are the foundation of your body, take care of them and they will take care of you, as Frank Thomas can tell you! Congratulations to Frank Thomas and all of the 2014 class of Hall of Fame inductees from all of us at Fenton Foot Care!

Do you have dry, itchy or scaly feet?