Growing pains in children’s legs have been debated for hundreds of years. Through the history of medicine growing pains have been attributed to multiple incorrect theories such as, rheumatic fever, psychological disorders, and even hair and eye color. In the 1930’s researchers proposed a link between orthopedic foot conditions and growing pains but it did not gain much traction and was dismissed. Over the next 80 years many studies have been done linking foot deformity to growing pains. Dr. James Hirt firmly believes growing pains are a myth and the real reason for the pain is abnormal foot function affecting the lower leg muscles.

In a recent study published in Podiatry Management, eleven children age 5-15 were fitted with functional orthotics to control their excessively flat feet and all eleven children had complete resolution of their “growing pains”. Functional orthotics are inserts placed in the shoes that are made to fit an individual’s feet. They allow the foot and leg to function is a more neutral and natural position.

Dr. James Hirt has personal experience with “growing pains” with his own son who had severe flat feet. At the age of about 5 years old began complaining of knee and leg pain at night. “I immediately made the connection between the leg and knee pains and the foot deformity. I made my son a set of custom functional orthotics to put in his shoes and within days of wearing them the complaints of pain completed stopped. Occasionally the pains would return, but were a direct related to my son not wearing his orthotics. To this day I keep my son in orthotics and he has been pain free and happy.”

“I only wish when I was a child someone would have made the link between my flat feet and the horrible “growing pains” I had. I remember going to the doctor on multiple occasions compl 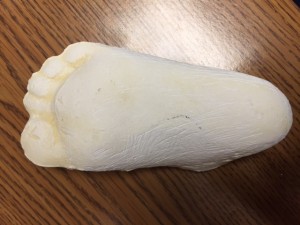 aining of severe pain in my legs, and my mother was told it is just “growing pains he will grow out of it”. I wish I would have been referred to a podiatrist back then, I am sure it would have prevented many nights of me lying in bed unable to sleep due to the so called growing pains.”

Based on his own experience and the many children he has treated Dr. Hirt confidently concludes growing pains have a logical explanation. “Every child I have treated with the diagnosis of growing pains has had complete resolution of their pain once custom functional orthotics were made to control the abnormal foot function,” he explains. Flat foot is not the only foot deformity that can cause these pains; high arches, tight Achilles tendons, and many other foot and ankle deformities can cause the same symptoms. When the foot and ankle are not functioning correctly leg muscles get overused and fatigue easily, abnormal stress occurs to muscles tendons and bones this all results in pain in the legs and knees.

Do I have fungal nails?

My Big Toe Woke Me Up!