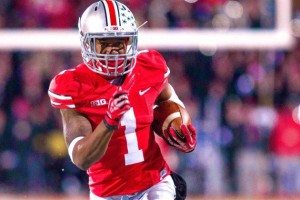 The Michigan State Spartans had a rough time this past weekend, losing a tough game against the Ohio State Buckeyes in East Lansing.  But a player for the Buckeyes had it a little bit rougher.  Kick returner and utility offensive player Dontre Wilson suffered a broken foot in the game.  Wilson leads the team with 1,064 all-purpose yards and has played as a running back, receiver, and kick returner.  This is a huge blow to the Buckeyes, as Wilson is expected to undergo surgery to repair the fracture, which will sideline him for more than a month.  “On average, bones take 6 weeks to heal once immobilized, but factors such as age and health play a role as well” says Dr. Hirt, “someone Wilson’s age and physical condition might expect a shorter recovery.”  But with only 4 weeks left in the season, his return this year is unlikely.

While it is unclear when in the game Wilson’s foot was broken, he caught two passes for 23 yards including a touchdown in the game.  He also was involved in the postgame celebration, seemingly pain-free.   While this may show just how tough Dontre Wilson is, it also illustrates how even if you can walk on your foot, it could still be broken.  “Simply because you can move and or walk on your foot does not mean that it is not broken” warns Dr. Hirt “you will need to have an x-ray to be sure,” and being sure that a bone is not broken is very important.  “The consequences of not properly healing a fracture are serious and permanent, from arthritis to deformity and healing in the wrong position, which leads to pain and complications down the road” says Dr. Hirt.

So if you suspect you have a broken bone in your foot or ankle, come in and have it checked right away, even if you feel that you can still catch touchdown passes!  We offer on-site digital x-rays and diagnosis and can get you checked out and cleared or put you on the path to a full recovery.  At Fenton Foot Care we use the most cutting edge surgical and non-surgical techniques to get you back to your full potential quickly, and with minimal pain.  So make an appointment today!